On January 20, 2012, primus pilus Gaius Crastinus spoke three times to the 6th, 7th, and 8th graders at Northview Middle School in Indianapolis, Indiana.  He was fortunate to have with him his nephew Trevorius (Latin III senior from North Central High School, Trevor Lanahan).  With Trevorius, he presented the ins and outs of the fiercest legion ever to fight for the eagles of Rome, Legion X.  As you can see, the students had a great time, especially when they got to check out the armor and learn to battle on stage! 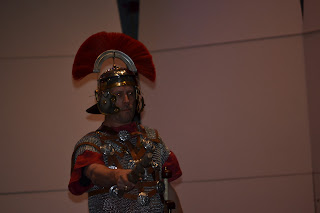 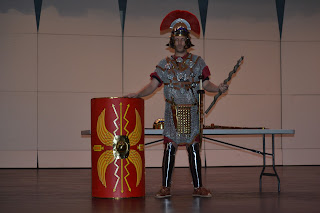 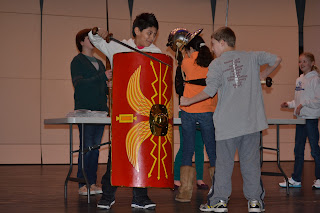 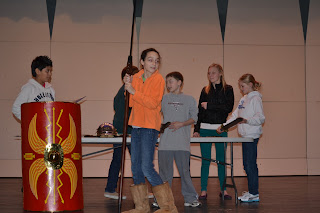 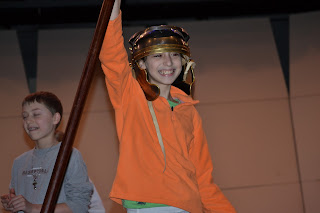 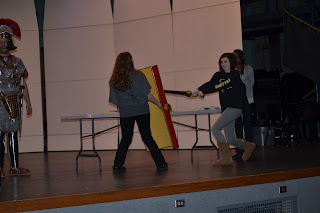 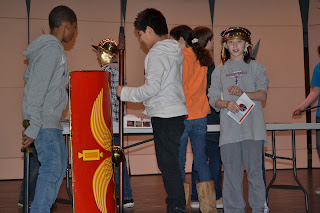 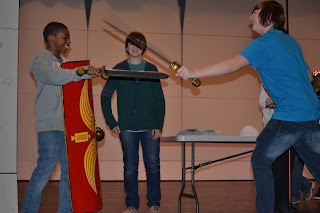 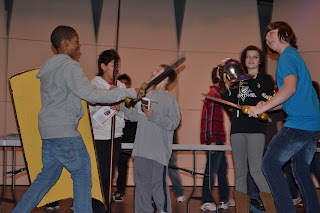 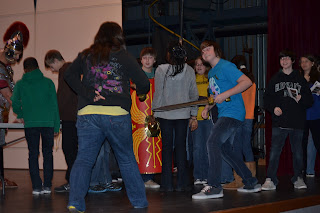 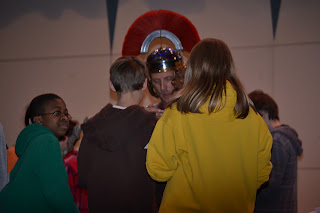 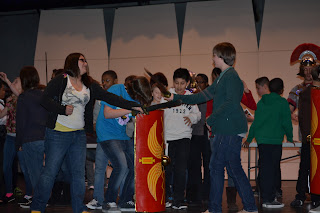 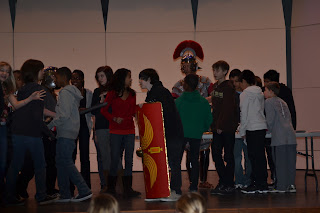 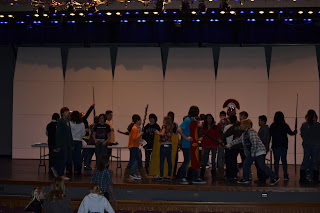 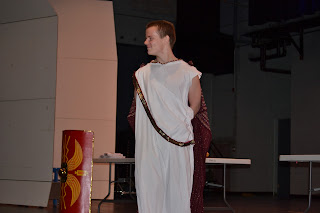 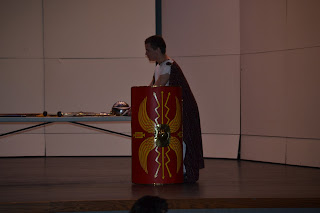 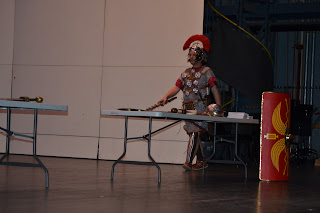 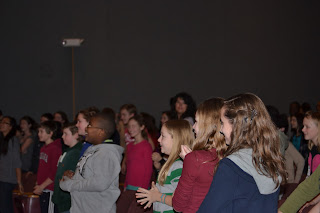 Posted by Magister Christianus at 11:08 AM 4 comments:

So what does a young man who has just graduated with a B.A. in Classical Studies and gotten married do next?  Go teach Latin in the inner-city!  My wife, also a soon-to-be Latin teacher, and I had applied in several different school districts, but one in particular showed promise, the Kansas City Missouri School District, and the reason was the Martin Luther King, Jr. Latin Grammar Magnet Middle School.  Now an elementary school, King was part of KCMSD's magnet program to fight segregation.  It had two Latin teachers in each of grades 6-8, and two Latin resource teachers as well.  Our first thought was that this was heaven on earth.  Eight Latin teachers in one school!  A public school where students wore uniforms and were required to take Latin!  Classical culture infused throughout the curriculum!

We soon learned that this was not Elysium, but then again, it was not Tartarus, either.  We worked with many wonderful colleagues and learned the true craft of teaching, something that cannot be learned in education courses or even while student teaching.  Our school was at 42nd and Indiana, just inside the 43rd Street gang zone that belonged to the Crips.  While we taught there, I teaching 8th grade Latin and my wife teaching 7th, we learned about the Crips and Bloods and gang life in general.  We discovered that the year before we arrived, there had been a gang lynching one block from our school and the body had still been hanging from the tree as the school buses full of children arrived at school.  One of my own more disturbed students was eventually withdrawn from the school after being arrested for armed robbery the night before.  Remember, I was teaching 8th grade.  One of my students took off the tie from his uniform, lassoed another student with it, and began dragging him across the floor while shouting, "Come on, dog!"  The mother of one of my students showed up for a parent conference wearing a pink leather mini-skirt and bustier, complete with bunny ears on her head.  Another showed up at the school with a belt and chased her son around the second floor in an effort to deal out punishment.

As I say, we learned a lot while we were there.  I learned just how much I love children.  I learned how to control a classroom while attempting to deliver instruction.  I learned the deep truth of the French essayist Montaigne when he wrote, "It is the achievement of a lofty and very strong soul to know how to come down to a childish gait and guide it.  I walk more firmly and surely uphill than down."  (Of the Education of Children)

I also began to develop more fully my beliefs about Latin instruction.  We used a book called Cambridge Latin Course, which remains a popular textbook today.  Pedagogically speaking, it is at the opposite end of the spectrum from the books I had in high school, Latin for Americans and Our Latin Heritage, and from the approach taken by the professors at Indiana University.  In short, the Cambridge series presents stories on the assumption that students will pick up the grammar as they go.  The books and instructors I had present the grammatical foundations of the language first, building up to more interesting stories.  I began to be convinced, and remain convinced to this day, that two students who start out with each approach and complete an undergraduate degree in Classics will end up in about the same place.  Most students, however, do not complete such a degree, and by the end of high school, the two students from the two different methods will be about as far apart as they could be.  In the end, a great many students will not go on to read Latin fluently, but the student who has been trained in the grammatical foundations will have a structure by which he can learn well not only other languages, but any other subject.

After two years of teaching at King, my wife and I decided to make the move to graduate school.  I remember a defining conversation about this decision taking place at the Pizza Hut near where we lived.  My first act was to contact my good friend and former Greek professor, Dr. Tim Long, at IU.  He gave me a list of the best graduate schools for Classical studies, and then drew a line, separating the top notch ones from those that were good and would hold almost guaranteed admission for me.  I applied to several and visited the University of Illinois, where I would have had a teaching position immediately as part of my financial aid package.  I had looked at The University of Texas, which was above the line on Dr. Long's list, but had decided not to apply.  After going out to a movie with a colleague from King who had gone to U.T. for her graduate work, she convinced me that, based on my G.R.E. scores, I would be guaranteed financial aid.  On a whim, I applied, and was accepted.

The next chapter in this story takes us to Texas, but I shall never forget the lessons I learned teaching inner-city middle school Latin my first years out of college.  Whatever ability I have to relate to students and present material in a way they can understand was forged in that crucible.
Posted by Magister Christianus at 3:38 PM 6 comments:

Soldiers in the Classroom 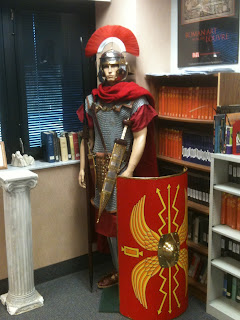 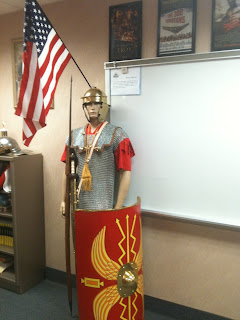 These are just pictures I snapped with my phone.  I should have better ones uploaded early next week.

They make a fine addition to our classroom.  I don't think we will have too much trouble with classroom discipline now...not that we ever did with the best students at North Central!
Posted by Magister Christianus at 1:02 PM 4 comments:

It only seems right that I post this next installment on a day when I have been doing Classics research at Indiana University. Whenever I have a Classics research need, I head to the Main Library at IU. If I have a Classics-related question, chances are good my first email is to a friend on the fifth floor of Ballantine Hall, the home of Indiana University Classical Studies. As I have often told my parents over the years, their putting me through college has produced dividends that far outlasted their four-year investment. My wonderful experience of IU Classics, however, almost never happened.

I enrolled as a freshman at IU with several scholarships under my belt, including ones from the Indiana Junior Classical League and the National Latin Exam. A placement exam I took during freshman orientation, however, said that I earned no credit in Latin. I explained to the advisor that I had several Latin scholarships and was planning to be a Latin teacher. He double-checked the scores, and there had been a computer glitch that cut all the scores in half. I actually had earned enough credit to start my first year of college Latin in a 300-level Cicero course.

That first course was with Prof. Betty Rose Nagle. I was fortunate to continue my study with Prof. Ted Ramage for Livy, Prof. James Halporn for Latin prose composition, Prof. Eleanor Leach for Horace and Catullus, Prof. Louis Perraud (now at the University of Idaho) for Plautus and Terence and again for Ovid/Propertius/Tibullus/Catullus, Prof. Mark Damen (now at Utah State University) for Vergil's Eclogues and Georgics, Prof. Tim Long for Greek, and Prof. Betty Rose Nagle for Ovid. It is interesting that the first and last Latin classes I took at IU were both taught by Prof. Nagle.

Not only did my appreciation and passion for Classical Studies grow by leaps and bounds with such instructors, but I gained long-lasting professional relationships. I have remained in contact with Professors Long, Nagle, and Leach over the years, and both Long and Leach attended the wedding when I married the girl I had met in Prof. Halporn's class. My friendship with Tim Long is truly one of the treasured parts of my life. As I have acknowledged elsewhere, he has been a teacher, mentor, colleague, and friend, and I was very happy when we established a scholarship in his name at North Central High School.

After graduation with a B.A. with honors in Classical Studies, I immediately went into teaching and soon after pursued graduate work, all of which will be the subjects of upcoming posts. To this day, however, I can say that IU Classical Studies prepared me well to live my dream, and it is to its resources and to its faculty in Ballantine Hall that I still return as I continue to learn and grow in the greatest discipline within the liberal arts.
Posted by Magister Christianus at 6:37 PM No comments: