Tuditanus at The Oaks Academy

Today I had the great pleasure of presenting Publius Sempronius Tuditanus at The Oaks Academy in Indianpolis. This was the first persona that I developed six or seven years ago.  He is one of the guards at the tomb of Christ, and through him audiences get a glimpse not only into the history of the ancient Roman army, but into an event about which Richard John Neuhaus once commented, "If what Christians say about Good Friday is true, then it is, quite simply, the truth about everything."

A tip of the galea to the 6th, 7th, and 8th graders at The Oaks!  They asked so many wonderful questions that one of the teachers had to draw our time to a close.  They really made me think on my feet, which is something I love!

You can find more pictures by following Steve Perkins (Roman Personas) on Facebook.  Fans of Roman Personas will note the differences in my appearance from my personas of centurion Gaius Crastinus.  Tuditanus carries his sword on the right, as opposed to the centurion's left, and wears a simpler Coolus style helmet.  In addition, he does not wear the phalerae or greaves that centurion Crastinus wears. 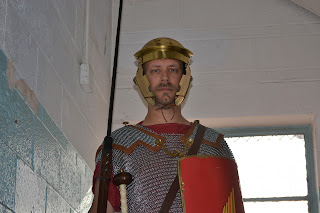 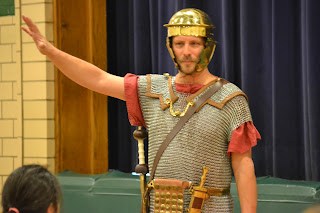 Posted by Magister Christianus at 1:45 PM No comments: