On 9 August 48 B.C., one of the bravest centurions ever to lead Roman soldiers died from a sword thrust through his mouth at the Battle of Pharsalus.  On 27 October 2011 A.D., that centurion returned to life.

Yesterday I debuted the character of Gaius Crastinus, first-rank centurion of Caesar's favorite Tenth Legion to a group of students at The Master's Study in Indianapolis, IN.  It was more fun that you could shake a pilum at!  Crastinus explained that the Senate had just declared war on Caesar and his legions, but had fled to Greece under the leadership of Gnaeus Pompeius.  Recruiting new soldiers for Legio X, Crastinus told them all about life in the elite legion of his day, describing the training, camp life, and of course, giving a weapons demonstration.  At the end, those who showed themselves worthy by answering certain questions about the Roman army were invited to try on pieces of armor and weaponry.  These new recruits were put through some of the paces of learning to form a battle line, march, and maneuver according to commands barked by centurion Crastinus.

As you can see from these pictures, everyone had a great time learning about the army through this centurion whom Caesar described as being a man singulari virtute, of singular courage. 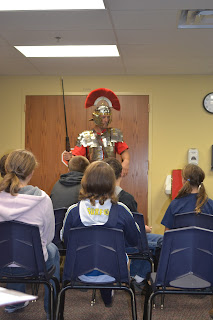 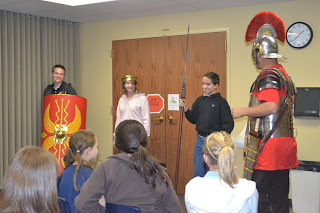 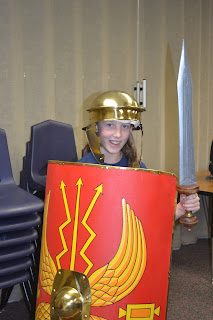 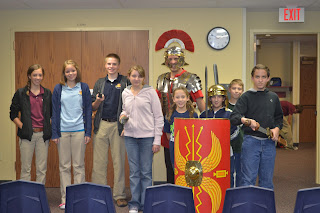 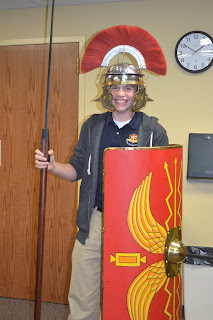 Posted by Magister Christianus at 6:15 AM